I must confess to having lapsed a bit on the cycling this last couple of months. This is only temporary and I am no less enthusiastic about social and leisure cycling and as a means of transport. The relative lapse is due in some part to how successful cycling has been as part of my retirement strategy to lose weight and get fit. As I’ve got lighter and fitter I have started to enjoy walking again and have been tempted back on to the squash court. I gave up regular squash and cycling at much the same time at the age of about 40, the beginning of my slippery slope to obesity and sloth. 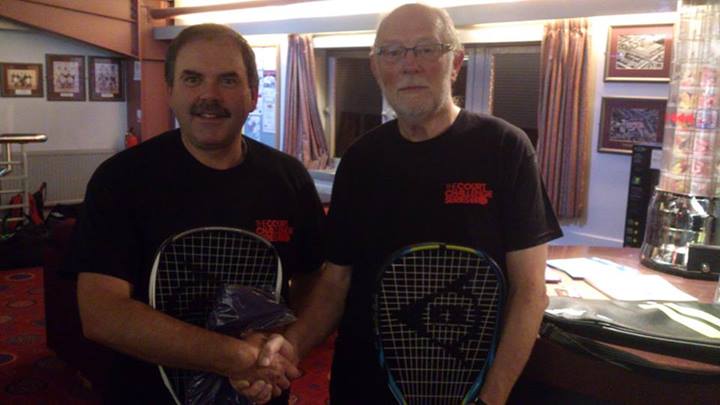 I’m on the right of the picture, shell shocked after finishing as runner up in a handicap racketball tournament.

Since August I have been playing racketball, similar to squash and played on the same indoor courts. I’ve joined the Bradford U3A racketball group and we play twice a week. I still seem to have a good squash brain and my speed around the court and stroke play are getting better. I have managed to win a small local U3A handicap tournament and was runner up in another. This was partly due to me being at the time an unknown and playing in some old track bottoms and plimsolls. All this led to a generous handicap!  I have added to my list of targets, alongside some sportives, to enter the Yorkshire Closed Racketball Championships in the over 65 category next September. And as of this week I am the U3A national racketball advisor with the role of networking and developing racketball in other U3A regions. Racketball can be just as competitive and demanding as squash but because it is easier to learn and play decent rallies it is particularly good for beginners of all ages. I enjoy very much the sessions with the ‘mixed ability’ U3A group. Several of us are ex-squash players but most are new to racket sports. We have an excellent coach, Saeed, and an extensive repertoire of skills practice routines and various ways of playing games that allow individuals of widely varying ability to play on near equal terms. We all get plenty of exercise in a safe and supportive environment and enjoy the social side when we finish a session and go to the club cafe and bar. Some of the keener members have joined the club that hosts our U3A sessions so they can play in the club ladders and mini-leagues.

In addition to this I have developed a range of walks from my home though the greenbelt of the Aire Valley. These make use of an extensive network of paths and bridleways through mixed pasture and woodland. They range in length between 2 and 6 miles, nearly all off road, and typically I do them non-stop at an average speed of 3.5 miles an hour. I’m doing these walks about 3 time a week. This with the racketball and the occasional session on my turbo rollers is helping me get a bit fitter and not put on any weight.

I have definitely lapsed on the diet side of things. I got down to 14 stone 3 lb early in the summer but have stabilised at 14 stone 7 for the last 3 months. I’m not unhappy about this and in any case I couldn’t go on losing weight at the same rate as I had for the first year when I started at 17 stone 7 lbs. I’ll be happy to get through the winter at about where I am now and have a push to lose another stone by spring. I’m not anticipating too much trouble achieving this as I will get more exercise from racketball as I improve and get more involved in competitive play and  I will be increasing my cycling as soon as the weather takes a turn for the better.