I’m currently reading Tyler Hamilton’s ‘The Secret Race’ that gives the low down on his time with the US Postal professional cycling team and Lance Armstrong. The focus of the book is the doping regime their top riders used to win the Tour De France, particularly the use of EPO. They employed the notorious Dr. Michele Ferrari as their coach and doctor. What I found interesting is that the use of EPO was a part of the training and racing regime but the underlying science and other aspects of the training programme, innovative at the time, are now the orthodoxy. Minus the illegal drug use, the Ferrari training programme informs nearly all scientific training programmes today. It’s all about maximising certain numbers. Whether this is done within or without the rules, everyone is chasing the same numbers. One number that is a prerequisite to winning the Tour De France is that you must be able to sustain a certain power output, measured as wattage. The figure you need to achieve is 6.7 watts per kilogramme body weight. So for me to win the Tour De France at my present weight my threshold wattage would need to be 670 watts. Since Bradley Wiggins’s is something like 450 watts the problem is obvious. Assuming mine is about 200 watts, I would have to weigh about 30 kilos, 4 stone 10 oz. to achieve a figure of 6.7 watts per kilogramme. This is why, according to Hamilton, Ferrari was obsessed about weight and diet. He may have been the overseer of their EPO, testosterone, steroids and other performance enhancement and  ‘recovery’ medication but to them he was more like a body weight fascist from the extreme wing of Weight Watchers. His argument was that for the vast majority of racing cyclists the easiest way to maximise their watt/kilogram ratio was to lose weight. It is interesting that central to Bradley Wiggin’s preparation for the Tour De France was a weight loss programme to shed 7 kilograms  – over a stone – without losing power. From the 77 kilos of his track days he was down to 69 for the Tour. In the process he reduced the percentage of his weight made up of fat from 7% to 4%. I’ve reduced my percentage body fat in the last 5 months by 7 percentage points. Easy. But I started from a high of 42%. This is another reason I will never win the Tour De France.

It is because of the science of cycling performance now – it’s all about the numbers – that  I still prefer road racing to track racing. Bradley himself admits that he is more relaxed and comfortable competing on the track. If you know the numbers, you know who will win the 4000 metre pursuit, for instance. In fact, why not get all the figures independently certified and decide the medals at a meeting of doctors? Of course events with an element of strategy, team tactics and chance, like the Madison or points race, cannot be reduced to just the numbers. 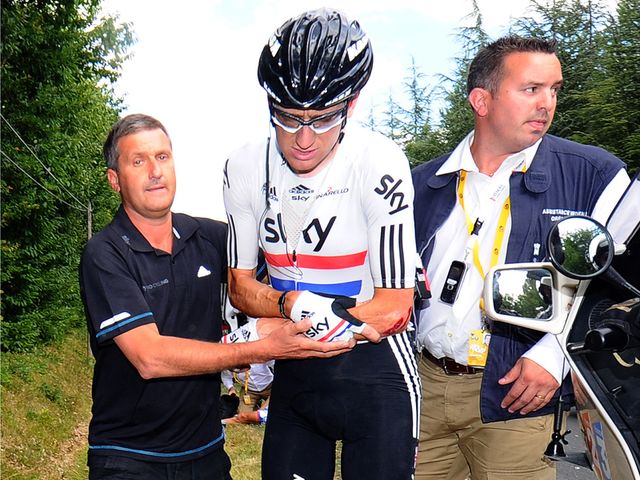 Wiggins crashes out of the 2011 Tour De France

Outside of purely technical track events perhaps, the numbers do not always win. As Tyler Hamilton says, there is no measurement for the amount a cyclist is able or prepared to suffer. In my own experience I have known racers who have succeeded because they can out-suffer their opponents on a particular day. And team strategy and tactics are often decisive in the outcome of races, not to mention the psychological aspects. And then you might fall off and break a collarbone, like Wiggins did on stage 7 of the 2011 Tour. But what was he doing languishing in the middle of the bunch on a sprinters’ stage (Mark Cavendish won it riding for HTC) over a flattish route where his sole responsibility as the team’s general classification man was to avoid crashes by riding near the front? Wiggins was in the form of his life, according to the numbers, but this counted for naught.