I have been over 17 stone for quite a few years now and I would be embarrassed to say what my body fat percentage is. I semi retired in July 2011 and will be fully retired in July 2013. My plan is to lose weight and get fitter in order to enjoy a reasonably lengthy and active retirement and with this in mind I have decided to get back into cycling. I had been thinking along these lines for quite a few years but now it’s crunch time. I have never entirely given up cycling – the odd leisure ride along the canal and even more occasional longer run – and so am hopeful that I may still have some residual physical benefits from my days of long distance touring and racing that came to an end in my early 40s. And I can’t pretend that Bradley Wiggin’s winning the Tour De France in July was not inspirational and provoked quite a lot of nostalgia about my own past racing career, such as it was. 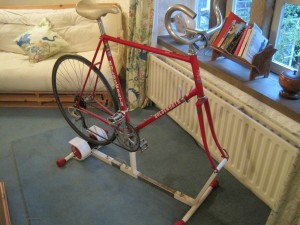 So, in brief, I got my old turbo trainer out with the Holdsworth bike on it I bought from Ellis Briggs of Shipley when I moved to Leeds from London in the 70s and had a few 10 minutes spins on this through July and the first 2 weeks of August. The last 2 weeks in August we went to France with our friends Robin and Lesley to stay with their daughter Judy and partner Matt who had recently bought a cottage just outside Bergerac in the Dordogne. They had bikes there and the three of us – Judy, Matt and myself – took to doing a short training run every other day of about 6 kilometres. The first 2 kilometres are an uphill drag and then mostly flat or downhill with a kick at the end just before the village.The first time I did it I got off and walked up parts of both hills. The second time I got off once and the third time I completed the circuit without dismounting – just. My time improved from 32 minutes to 28. Judy and Matt were both faster than this but they are over 25 years younger! This modest progress was  encouraging and, inspired by these rides, I have devised a 6.5 mile circuit round Greengates in Bradford where I live. It is quite hilly, a fair bit of traffic and 4 sets of lights, so not ideal. It could not be more different from the quiet, warm and wooded lanes just outside Bergarac! My first attempt took 42 minutes on the 1st September and I have since got this down to 36 minutes as of today, the 2nd October.

On returning home from France I also started going on the 15 miles beginners’ and returners’ social rides organised by the Leeds Cycle Action Group on Saturday mornings from Roundhay Park in Leeds. These rides go at the pace of the slowest rider with a sweeper and ‘spanner man’ bringing up the rear. The group leader waits at the top of the more demanding climbs and changes in the route so no one gets left behind. Everyone was very friendly and supportive and I was made very welcome. The first ride was out to and around Eccup Reservoir. A few small hills but I managed OK. The following Saturday was on mainly dedicated cycle paths to Temple Newsam and back where I had to get off on the longest hill. My third ride was last Saturday, the 27th September, which I found a bit of a killer. We went up Slade Hill right at the start, which I just got up, and then Rigton Bank, where I had to walk the steepest section of about 1 in 6 or 17%. Absolutely knackered. Then to finish there was the long drag into the wind past Scarcroft golf course and up Tarn Lane. None of this required getting off but by the time I got back to the tearoom at Tropical World I was done for. I felt quite ill and had to sit down while David Kent, an old friend who I met when I started riding with the Leeds CTC 40 odd years ago and who I have introduced to this group, queued for my coffee and toasted teacake. He got me a vanilla slice too which was very kind of him, assuming correctly that I badly needed a sugar jolt! At least I am being reminded of what it is to suffer on a bike and that I still have some stomach for it.

I discovered the Leeds Cycle Action Group (LCAG) on-line when I was searching for information about the Leeds CTC (Cycle Touring Club) section. I hadn’t ridden with them since the early 80s and discovered they had more-or-less disbanded. A remnant of the group now rode with the LCAG. Apart from being an activist group campaigning on cycling issues in Leeds they organise a series of social rides. In addition to the Saturday morning beginners and returners rides (more of which in another post) they have intermediate runs of about 35 miles on alternate Sundays and, on alternate alternate Sundays, longer runs of 50 to 70 miles. My ambition for between now and next Spring is to graduate to the intermediate rides. If I can achieve this I hope to be up to some of the longer rides by the Summer. The longer term plan is to be able to ride CTC and club reliability trials. These are organised rides over a designated route to be completed within a certain time with intermediate controls and time checks to make sure you have not taken any short cuts. They can be any length, usually between 30 and 100 miles. The longest I completed was a 240 mile in 24 hours, with David Kent and about 60 other riders, round about 1978 starting and finishing at Odsal Top, Bradford. The route included dinner at the George in Dent in the Yorkshire Dales,  a tea wagon at Penrith in the early hours, the climb of Hartside Moor to Alston, the highest town in England, a glorious ride down Middleton-in-Teesdale as the June sun came up, breakfast at a B&B in Richmond, lunch in a fish and chip restaurant in Wetherby (where I had two portions of fish and chips and four mugs of tea) and back to Odsal Top for 3.00pm Sunday. I think I can guarantee I won’t be doing one of those again! But you never know.There are a number of similar types of events these days, called Audaxes and Cyclosportives which I may well have a go at in due course, particularly some in France.

Apart from getting back into cycling, the other strand to my campaign to lose weight and get fit is to modify my eating. My sister-in-law Gill bought Julia a copy of the Hairy Dieters recipe book – How to Love Food and Lose Weight. This has been very successful. I was tempted by a Horizon programme on the BBC sometime ago about the effectiveness of reduced calorie diets and incorporating regular fasting days into your routine. It seems there are a number health and longevity benefits to this in addition to weight loss and control. However, I think that this would be too extreme while I am increasing my physical activity so I will be sticking to the Hairy Dieters’ plan. For the record I have lost 12 lbs so far, over a period of 3 months. 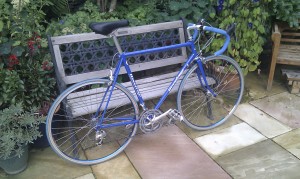 Something else I have done to encourage me is to get my old Woodrup racing bike out of the garage. I bought it second hand in 1974 and last raced on it in about 1981. It was extensively refurbished in 1998 but never ridden since. One day I hope there is enough clearance between my stomach and my knees for me to ride it again. The frame dates back to about 1964 so someone was probably racing on it in Yorkshire just as I was starting my racing career in South London.