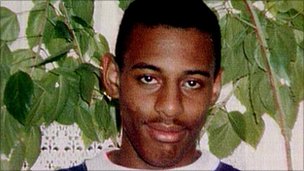 Yesterday 2 men where found guilty of the racist murder of Stephen Lawrence 18 years ago, April 1993, in Eltham, south east London. Although several people were arrested the evidence was found to be inconclusive and the cases dropped. For a variety of reasons including an inquest that returned a verdict of unlawful killing “in a completely unprovoked racist attack by five youths” and the evidence that the police had not investigated the murder properly, the MacPherson Report was commissioned. The report, published in 1999, identified ‘institutionalised racism’ in the Metropolitan Police as a fundamental factor in the bodged investigation. For a full time line of the story see the BBC website http://www.bbc.co.uk/news/uk-16283806.

On the radio this morning, BBC 4 Today, the concept of institutional racism was explained by asking the question; did the police give the murder the time, resources and serious consideration it warranted? The answer was no. Was this because the victim was black? The answer was yes. The police always have to make decisions and judgements about how to allocate scarce resources and if they routinely take the colour of victims into account when making these decisions, this is institutionalised racism. It is a matter of a pervasive culture that provides the background to individual choices on procedural matters. If we take this as the meaning of institutionalised racism, then it still boils down to racist attitudes and decisions by policemen, police staff and police managers and leaders. The institutional culture provides the recipes for thinking and acting, and also for relatively unthinking routine engrained behaviour, language, attitudes and so on.  The thinking and unthinking acting reproduces and reinforces the culture. It is institutional racism as it permeates the whole institution and provides it with its taken-for-granted common-sense view of the world. In an interesting piece today in the Independent  (The killing of Stephen Lawrence ended Britain’s denial about racism), particularly on the initial coverage of the murder of Stephen Lawrence by the media, Brian Cathcart defines institutional racism using a quote from Jack Straw, the then Home Secretary, on the day the Macpherson report was published:

“The very process of the inquiry has opened all our eyes to what it is to be black or Asian in Britain today… and the inquiry process has revealed some fundamental truths about the nature of our society, about our relationships, one with the other. Some truths are uncomfortable, but we have to confront them.”  Chief among these truths was the existence of institutional racism, and Straw was clear that it went beyond the police: “Any long-established, white-dominated organisation is liable to have procedures, practices and a culture which disadvantage non-white people.”

However, there are other aspects of institutionalised racism that the discussion on the radio did not bring out. An example of another dimension to institutionalised racism is the 1981 British Nationality act. This act created a number of different bands of citizenship and importantly removed the ‘right of abode’ in the UK  from many commonwealth citizens who previously had it. The new Act defined a category of full UK citizenship with the right of abode that systematically excluded the majority of ‘new’ commonwealth citizens – predominately black –  but retained it for the majority of individuals in the ‘old’ commonwealth countries, for instance Australia and Canada. To have full British citizenship with the right of abode it was now necessary to have had a UK domiciled relative who was a British citizen prior to 1949.  The Act therefore had a disproportionate effect on black and Asian commonwealth citizens – not by accident including, for instance, Hong Kong. Once this law is in operation and applied by border controls, it matters not whether the individual immigration officers are personally racist of not. They may not have a racist fibre in their bodies. The application of the racist law produces racist effects independently of the individuals applying the law equally to all who present themselves at the border control, or issue passports at the passport offices in commonwealth countries.

This was cross-posted to the Leeds University Public Sociology blog http://www.sociology.leeds.ac.uk/public/2012/01/04/institutional-racism-job-done/