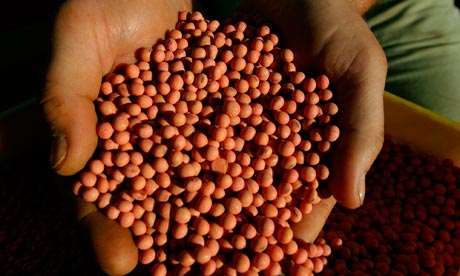 This has been a busy week for reporting on GM food issues. It started on the 2nd June with the announcement of the resignation of Professor Brian Wynne from his position as Vice Chair of the Food Standards Agency Steering Group on GM food. Brian Wynne is an acknowledged expert on the sociology of science and on the public understanding of science. This announcement was closely followed on the 4th June with a report that the new Secretary for the Environment, Caroline Spelman, supports the introduction and development of GM crops in the UK (Environment Secretary Caroline Spelman backs GM crops).

The FSA Steering Group Brian Wynne sat on has the brief to “shape and manage a public dialogue on food and the use of genetic modification..” (Food: The Use of Genetic Modification – A Public Dialogue). The gist of his complaint and the main reason he resigned was that the “shape” of the public dialogue was being heavily influenced towards a pro GM stance despite the Group’s Terms of Reference stating that no interest should be allowed to dominate and, according to the Group’s Agreed Aims and Objectives, no particular conclusions and outcome should be presumed. In practice the orchestrated and manipulated public dialogue will amount to vast sums of public money being spent to bring the public round to accepting GM foods and the biotechnology industry’s version of their safety for humans and the environment and their benefits for food production.

One of Professor Wynne’s closely related criticisms of the process is that the narrow scientific framing of GM issues ignores the important social, political and ethical aspects of the GM debate. “Genetically modifying food is having devastating impacts in parts of the developing world like South America, where rain-forests and communities are being wiped out to make way for vast GM soy plantations that provide animal feed for UK factory farms.” The scientific framing of the issues tends to focus on field and laboratory trials, local ecological impacts and possible consequences for human health (not that these are in anyway settled yet) rather than, for instance, the consequences of a small number of large corporations having private control of the global food chain (for instance through the patenting and ownership of the technology) or the geographically dispersed political and cultural impacts.

An even more recent report (Sunday 6th May GM lobby helped draw up crucial report on Britain’s food supplies) may well add substance to Brian Wynne’s concerns. It is claimed that there has been close collaboration with powerful biotechnology interests in the production of the FSA’s 2009 GM Crops and Foods document that led to and shaped the terms of reference of the Public Dialogue initiative. The Guardian report also claims the GM interests may have been involved in choosing the membership of the Steering Group.

In his letter of resignation Brian Wynne is incensed that the Chair of the FSA, Lord Rooker, (apparently a GM enthusiast) condemned both the critics of the FSA’s position on GM and the general public (who are to be engaged in unbiased, open and transparent dialogue) as “unscientific”. Apart from betraying the bias of Lord Rooker, this belittles concerns over the social and ethical consequences of the development of GM crops and allows the ‘science’ to dictate – explicitly and implicitly – the political and social policy debates. It seems the Public Dialogue project may well become an example of this process and be worth keeping an eye on, given the Chair of the FSA’s and the Secretary for the Environment’s expressed views in advance of the public dialogue and any public consultation.

————————————————
Notes:
The new Secretary for the Environment, Caroline Spelman, recently resigned as a director of the food and biotechnology lobbying company Spelman, Cormack andAssociates which she started with her husband in 1989. It doesn’t appear to have a web site.

Brian Wynne was a key speaker at the BSA President’s event last February, Putting Society into Climate Change. His presentation, although not about GM crops specifically, does give GM science based policy as an example why environmental issues cannot be seen as purely technical and scientific issues. With hindsight you can hear the concern that led to his resignation today. The podcast of his BSA presentation is available from the BSA PG Forum: http://pgforum.libsyn.org/index.php?post_id=584665. The BSA Presidential Event was the subject of a post on this blog – How to put society into climate change. The post contains a short description of Brian Wynnes’s talk and the point he made about science based GM policy.

Caroline Spelman’s former directorship of the food and biotechnology lobbying company Spelman, Cormack and Associates.
Spelman, 52, set up the firm with her husband, Mark Spelman, in 1989.

One Response to Who is running GM food policy?