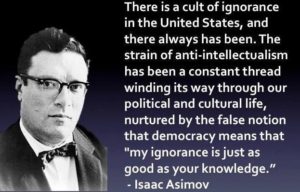 A Facebook friend posted this quote from Asimov and it prompted me to return to some thoughts I have had on democracy since the democratic votes that won the referendum on EU membership for the leavers campaign and Trump won the USA presidential election. Asimov was writing about America but there has been a similar anti-intellectualism in the UK for generations, particularly in England. This has been manifest in a number of ways in the past – the preference for the amateur over the professional (for instance as portrayed in Chariots of Fire), the privileging of commonsense over abstract theory and most recently in Michael Gove’s claim that “people in this country have had enough of experts”. He’s rowed back on this recently and now says he was referring to economists in particular. He said that he wanted people to trust their own judgement rather than listen to experts. But on what are people’s judgements made? Is it on the basis of their own research, their own examination of the evidence, or perhaps just on the evident facts? I think for most of us the first two are unlikely. So we are probably most swayed on the basis of facts as they are presented to us in the media and by politicians and self appointed opinion leaders, amongst them Gove himself of course. At the same time he is encouraging people to trust their own judgement he is of course trying to influence that judgement by encouraging them to ignore experts. One fact offered in the brexit referendum campaign was that we sent the EU £350 million a week and, post brexit, this was pledged to be spent on the NHS. The first is a rather selective fact as it is a gross figure and takes no account of the money that comes back from the EU. In fact the rebate is deducted before anything is sent so in practice only about £55 million goes out. And this takes no account of the significant financial income we get via business, trade, grants etc. by virtue of our membership. As is now becoming increasingly clear in the aftermath of the vote as these less visible returns to us become evident, we get a positive return on our ‘expenditure’ to the EU. As for spending an additional £350 million a week on the NHS, it’s a promise for the future. That the pledge was made is a fact. The promised expenditure, if it happens, lies somewhere in the future.

The Asimov quote claims that the anti-intellectualism rests on the false notion that one individual’s ignorance is as good as another’s knowledge. If this is so, and in theory it is since every vote is equal and has the same influence on the resulting decision, than policy driven by the numerical count of votes alone could be based upon the aggregate ignorance of the people or the aggregate wisdom. Who knows? Obviously I think that my decision to vote to remain was based upon knowledge and, being in possession of that knowledge, I can’t understand why anyone would vote for leaving other than supposing they must lack my knowledge. Why they lack the knowledge is an open question. Lack of reliable information or being exposed to false information? Lack of a general knowledge about what the EU is, how it works and, despite its flaws and problems, how it has and would continue to benefit our economy and security? I think we ‘the people’ have made the wrong choice. But I don’t know for sure. Time may prove that is me and others like me who voted to remain made the wrong choice. The point is that in reality neither the leavers or the remainers know if they have made the right choice. If that is all there is to it, that ‘the people have spoken’ (in fact 37% of the eligible vote which didn’t but arguably should have included 16 and 17 year olds since it is their future we were gambling with) then the executive and legislative wings of our parliamentary system should just implement the policy diktat of the 37%. However, I would have thought the problem with letting the unmediated decisions of multiple ‘men on the Clapham omnibus‘ drive final policy decisions is obvious given the complexity of the law and governance and its necessary dependence on intricate and detailed knowledge. This is what the role of parliament is, not the role of the people. We vote for the people we want to make decisions on our behalf, based on the best knowledge and evidence available, weighing up all the pros and cons and coming to a measured assessment of the nation’s best interest and how best to secure it through legislation and policy. Yes, I know it doesn’t work this way either, but at least we can reverse our electoral decisions periodically and can seek to influence how our masters specify pros and cons and the nation’s best interest. This is why I think parliament should be involved in the over sight and conduct of the brexit negotiations and, through the opportunity of debating and voting on it, be responsible for the final decision.

One very reasonable argument against policy dictated and designed purely by experts and technocrats is that it makes our democratic institutions and processes redundant. They know best so let them get on with it. Rather than elections we should have exams and peer selection. The reason this is a bad idea is that technical expertise on achieving given ends very often has nothing to say about what the ends should be. This discussion requires not just instrumental knowledge but a morally engaged wisdom. In any decision there will be unintended consequences, winners and losers, collateral damages of various sorts, medium and long term consequences that may make implementing today’s good idea into a massive shot in the foot. But if this is a flaw and danger in technocratic rule then equally is it a flaw and danger of populist rule. If all we need to do is implement unquestioningly the decisions of ‘the people’ as expressed in referendums, why would we need parliament in its current form and the democratic process as we currently understand it? Democratic procedure would be reduced to mere opinion polls and politics to the unquestioning and unmediated implementation of opinions thus expressed. On the one hand we have the dictatorship of the technocrats and on the other hand the dictatorship of the masses as orchestrated by undemocratic opinion leaders and demagogues.  It is negotiating a course through these two extremes that is the essential role of parliament and our democratic system however imperfect. Heaven knows, there are serious problems with our party political and parliamentary system and what passes for democracy but collectively these are still immeasurably better than either a dictatorship of the technocrats or of the the masses as ventiloquised by mass media and political demagogues.

One Response to Democracy and its discontents