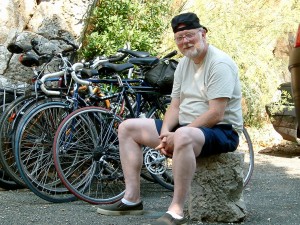 This blog will be mainly about my efforts to get fit enough to once again take to the roads and enjoy cycling, what had been my main sport from 1962 at the age of 16 to my late 30s when I finally gave up racing. Since then, through the 1980s and 90s, I continued to cycle for transport and for pleasure. This has included touring in France on solos and on a tandem, particularly in the 1980s, the Sea to Sea and other Sustran’s routes. However, I have rarely used my bike over the last 15 years or so. 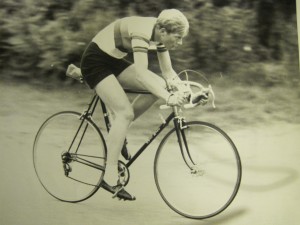 Me, aged 18, on the Portsmouth Road, near Esher, Surrey in the 1964 SCCU 25 mile time trial championship. I finished 6th I think.

A subsidiary purpose of the blog will be to jot down various memories of my previous cycling experiences from the 1960s and over the next few decades and some thoughts on the contemporary cycling scene. I recognise it is somewhat self-indulgent to make this public but the unfolding story of a desperately unfit overweight 66 year old trying to recapture some fraction of his past fitness and return to cycling may be of interest to a few people. If you are interested, the blog’s first post, Starting Again, tells a bit more of the story of how I got going again, thanks to this year’s Tour De France and some very good friends and their family.