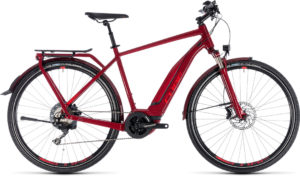 After several months of research and procrastination I’ve finally bought a power assisted bicycle – an e-bike. Power assisted means that you have to pedal; you can’t ride it like a motorbike or moped. Over 15.5 mph you’re on your own as the motorised assistance ceases at that speed. Above that you ride it like an ordinary pushbike. What sold me on the idea was a ride I did round the 38 mile Isle of Man TT Mountain Circuit a few weeks ago, a ride I wrote about here and which I could not have done on any of my conventional road bikes. I did a fair bit of the ride at over 15.5 mph so unassisted and reached speeds of over 30mph freewheeling down the mountain but made shameless use of the electric motor up the 7 mile mountain climb. It also makes hill starts and setting off quickly and smoothly in traffic much easier and controlled.

The other thing that prompted me to look into e-bikes was an experience I had a few weeks ago riding with my friend David in the hilly terrain around Settle and Bolton-by-Bowland over the Lancashire border. We only managed 26 miles and David, apart from on the flat and downhill, David was soft pedalling up all the hills or waiting for me. I had to get off on several occasions and walk for a bit to recover my breathing and heart rate on the steeper climbs. Depsite this being a ride long planned and looked forward to I’m sorry to say that on the whole it was not a pleasant experience. To put this in perspective David is 76 and, unlike me, has never given up cycling even doing the odd time trial up unto a year or two ago. Also he is only 11 stone compared with my 14 stone. Combine this with the fact that he is certainly able to produce as much power as me and probably more, the difference in our up hill performance is obvious, especially since I was suffering from the effects of a long term cold. Never-the-less, to match David I would either have to lose another 3 stone or increase my power by about 33% none of which is likely.

It’s the hills that are the killer for me and even though I’m OK one the flat or mildly undulating roads a hilly ride means I run out of energy quite quickly. The e-bike will allow me to enjoy longer leisure rides than I am capable of on my conventional bikes. My limit at the moment seems to be about 35 miles, less on hilly terrain and I’m often knackered when I get home. In fact often the last few miles are hardly pleasurable at all. I’m hoping this can still improve but I will never get back to the sorts or beautiful rides I had in my teens, 20s and 30s. I posted a picture here sometime ago of a certificate I got in the early 1980s for a CTC event covering 240 miles in 24 hours. At 72 those days are long gone. I used to cycle from Leeds to Burnsall in the Yorkshire Dales on Saturday mornings and be back for lunch! Now I can just about do a trip to Bingley 5 Rise lock to the café and back along the canal! With my e-bike 50 mile round trips like Burnsall will be back on the agenda. I will also be able to use the bike to visit friends who live too far away to cycle to and get there without being a sweaty mess and needing a lie down when I arrive. And I will still be getting exercise through cycling but will be in control of just how much effort I want to make rather than this being dictated by the hills and wind. It also means I can wrap up properly against cold and rain as with the power assistance I won’t be marinating in my own juices when the going gets tough.

I can’t think of a downside to this decision for me but time will tell. I’ll let you know what problems I have if any.