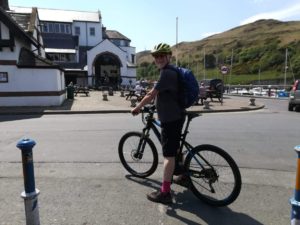 Last week we went to the Isle of Man with friends and while we were there I hired an e-bike to ride round the TT motorcycle race course, the Mountain circuit. I hired the bike for a day from The Green Wheelers Electric Bike Company at the Sea Terminal at Douglas who I can thoroughly recommend. When I picked up the bike it took about 5 minutes to have everything explained to me. Basically, you ride it like a normal bike. You use the gears as normal – lower gears on hills and at low speed, higher gears on the flat or downhill at higher speeds. The bike I hired had 9 gears I think (I forgot to count them!) and I only had levers on the right handlebar as the bike had a single chain wheel. The electric motor (250 watts) was controlled by a small unit with a display operated by my left hand. There were two big easy to use buttons marked + and – which cycled through the various ‘assistance’ modes. Smaller buttons were to turn the motor on and off and to vary the information displayed – time on the move, current speed, average speed and so on. The display also showed how much of your battery charge you had left and which of the assistance modes you are in.

Most e-bikes in the UK are described as ‘pedelecs’. This means that they don’t go anywhere under motor alone. This would make it a electric motorbike. Apart from freewheeling (when the motor turns off anyway) the bike won’t go anywhere if you’re not pedaling. The motor will assist your pedaling, not replace it. It does this by increasing the power you are producing through the pedals by a percentage. In ‘eco’ mode (in which the battery will last longest) the power you produce is increased by 40%. I can pedal along quite comfortably on a bike producing about 120 watts of power. In eco mode this would be increased to nearly 170 watts without any further effort by me. The other assistance modes are ‘tour’ (100% increase), ‘sport’ (170%) and ‘turbo’ (250%). So using the turbo assist my 120 watts would be increased to 420 watts, the sort of power a top professional cyclist would use climbing an alpine climb!

Obviously the battery life varies with how much assistance you use. When I rode round the Isle of Man TT circuit I used mainly the ‘eco’ assist mode and only used the ‘tour’ mode on the 12 kilometre climb. For this section I averaged about 9 mph and probably pushed myself up to 150 watts or so. Without the assistance I would have worked much harder and probably would have to have stopped a couple of times on the way up. I tried the sport and turbo modes briefly to see what they were like and it reminded me of how I used to ride at the height of my racing career in my 20s! However, I stayed in eco mode most of the time as I wanted a good workout. I rode 45 miles altogether as I took a detour off the circuit at Tynwald to meet friends in Peel for lunch. At the end of the ride I had used about 80% of the battery. It would probably last about 70 miles on eco.

Another thing that helps battery life is that the motor turns off at 15.5 mph (25 kph). On the flat or wind assisted I was bowling along at 17 or so mph. On the long descent of the mountain I was over 30 mph most of the time, touching 40. With a little practice on normal undulating roads you can keep the speed just under the 15.5 mph and ‘surf’ the motor. This makes riding very easy indeed. This has been described as feeling like your dad is riding beside you with his hand on the back of your saddle. Others have said it’s like the hills have been flattened out. For me it was like I was 45 years younger!

The bike I hired was a heavy mountain bike and the technology, motor and battery, have already been superseded. None-the-less it was impressive. There are many excellent off road routes on the Isle of Man for which it would have been ideal. When the day comes for me to buy an e-bike I will probably buy a lighter more road orientated version that would be easier to ride as a conventional bike. If the battery had run out on my hired mountain bike it would have been very hard work to get it home under my own power.

1 thought on “Isle of Man TT circuit by e-bike”