This week a new departure in my virtual racing career. A Zwift group called Sporting Course Time Trial Series run time trials over hilly courses on Zwift. You accumulate points over the series at the end of which a final leader board is constructed. So far the groups have been organised on the basis of FTP but on Thursday they ran their first event using the UK’s Veterans Time Trial Association rules. Veterans are riders 40 years of age or over. For all the standard UK time trial distances (10, 25, 50, 100 miles and so on) each age has a standard time. For instance, for a 10 mile TT a 40 year old has a standard time of 25.59 and for a 71 year old like me it is 29.14 – still marginally over 20 mph! The VTTA web site standards page also has a facility to calculate custom standard times for other distances. The race I took part in was 17.4 kilometres so my standard time was 31.38. I was the oldest rider by 5  years and, apart from a couple of 62 year olds, everyone else was under 60. As you will see from the results below the winner was the only female in the field and I was last. 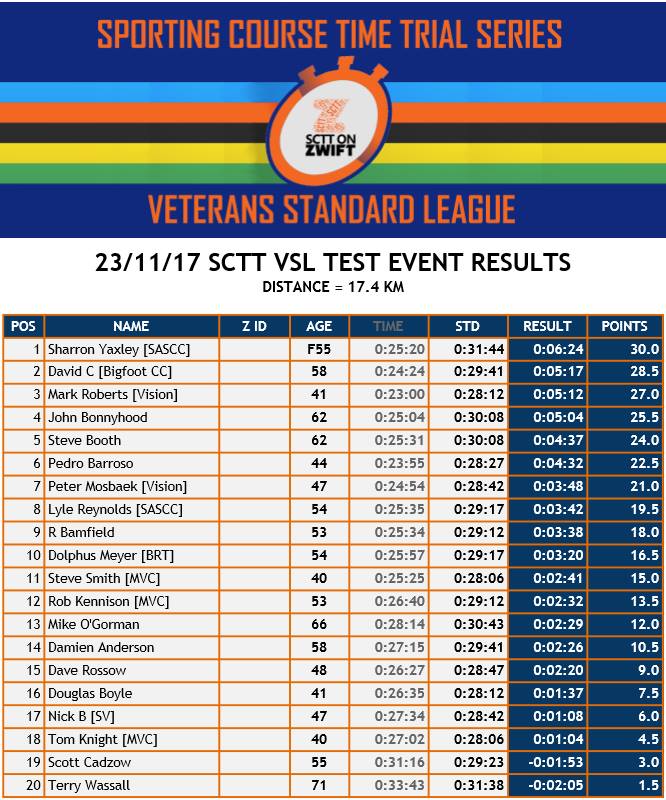 I was one of only two who didn’t better their standard time. The overall result is calculated on the basis of times achieved relative to the age standard. Compared with Scott who finished one place a head of me, I was 2.27 slower but on age standard I was only 14 seconds slower. I very nearly wasn’t last!

The intention is to run these VTTA style events on a regular basis so I hope to make some progress. I did the same course as a trial and recce on the Wednesday and went round in 34.42 so the race was just on a minute faster. In the process Zwift upgraded my FTP to 164 watts so I obviously made a bit of an effort.