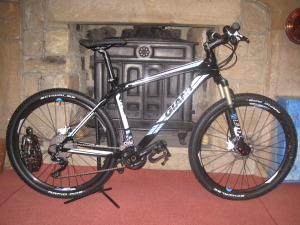 Today I collected a new mountain bike, a Giant Talon 0 from Edinburgh Bicycle Co-op in Chapel Allerton Leeds, partly paid for by the very generous collection my work colleagues made for me when I retired just over a year ago. I’ve done some easy off-road stuff on my hybrid bike over the years but it isn’t really suitable when the going gets a bit more rugged and technical so I’ve been thinking of getting a mountain bike for some time. The Talon seemed to be as good a specification as you can get for the money and better than quite a few. Reviews of earlier models suggested that the biggest weakness (and therefore the first candidate for upgrading) was the forks but the 2015 model has the Fox Float EVO CTD (CTD stand for 3 fork settings – climb, trail and descend) which is highly regarded. In fact the price for the forks alone is round £500, about half the RRP for the bike. It is the first bike I have had with disc brakes and the gears seem ridiculously low to a roady but I’m sure I’ll need them! Bottom gear seems to be 18 inches! For the full range of gears see the link below.

I’ve been invited out for a ride round Calverley Woods and the general area by a group of riders from the Airedale Olympic Cycling Club on Sunday December 7th who I contacted for advice on Facebook. I must admit to being rather nervous about this but I will go and at least introduce myself and see how far I get. The ride will be from Apperley Bridge will also take in the Canal to Rodley – Cragg Wood – Nunn Wood to Esholt – and back up onto the canal and take about one and a half hours. I’ll take my bike into Calverly Woods in the next day or two and see what it feels like. This video of a ride there does not fill me with confidence!

Many years ago (about 50 years) I rode a couple of seasons of cyclo-cross, cross-country racing (rather like the running version) on basically road bikes with lower gears, knobbly tubular tyres and a bit of old inner tube tied across the angle of the frame in front of the saddle to make the bike more comfortable on your shoulder when you had to run with it. The idea of cyclo-cross for riders like me – roadies and trackies – was a bit of fun and keeping fit in the winter. I was a bit heavy for the sport and spent quite a lot of time on my face in the mud with other riders riding over me! This was what decided me to take up squash as a winter sport instead, something I’ve revived recently in the guise of racketball. It will be interesting to see how I take to mountain biking. Although I’ve lost about 4 stone in the last 2 years I’m still pretty heavy and it’ll help when I’ve lost another half stone or so. I want to try out some of the mountain biking centre trails such as those at Dalby Forest but I’m sure there is lots to go at in and around Leeds and Bradford.