My new Giant has a compact chain set (50/34) and a 10 speed block (11/28) and I was a bit worried at the time that I should have specified a triple chain set to get the even lower gears I am likely to need at times, particularly if I attempt some of the hillier sportives. I consoled myself with the fact that I had a triple fitted to my Woodrup racing bike when it was refurbished by Bob Jackson’s in 2002 and would be able to use that on the hillier events if it  proves necessary provided the bike is comfortable enough. This thought prompted me to make a detailed comparison of the two bikes from different eras, one from the 1960s with a Reynolds 531 steel frame and one a full carbon 2013 Giant Defy Advanced 2. The first thing I did was compare weights – Woodrup 10.5 Kg., Giant 8.3 Kg. I haven’t ridden the two bikes back to back yet but I anticipate the Defy will be  stiffer and livelier.

As it turns out the Woodrup will not give me particular lower gears. The triple chainset is 52/42/30 but the 9 speed block is 13-25. This gives me a bottom gear of 31.7 inches compared with the Giant’s 32 inches. The slight difference in gearing may well be compensated by the Giant’s lighter weight and extra efficiency in delivering power to the wheels. Obviously there is scope to put a wider ratio block on either bike, increasing the largest sprocket on either to 30, assuming the gear mechanisms can cope. The Woodrup’s gearing can be viewed here and the Giant’s gears for comparison here. They both open in separate windows.

Another difference is that the Woodrup has 170 millimetre cranks whereas the Giant has 172.5 millimetres. The 170 length used to be considered normal for the majority of riders but these days 172.5 is normal and the 170 as short. I’m not sure how much difference this will make or if I will notice it. However, one article I found suggests that differences in crank length do not make any statistically significant difference in power output but can help when in a low aerodynamic racing position is required for, say, time trials.

The position on the Woodrup is rather ‘racier’ as would be expected given that the Giant is marketed as a sportive bike – a bit more comfortable for endurance events and a little less aerodynamic in rider position – where as the Woodrup, in its day, was an out and out racer. The Woodrup’s handlebars are about 2 inches lower with a 2 inch longer reach than the Giant. This is where the shorter cranks might help in stopping my belly bouncing up and down on my thighs!  Also the wheelbase is an inch shorter.

It will be interesting to see how I get on with the Woodrup (I haven’t ridden it for over 10 years) in comparison with the Giant. As I continue to lose weight and get a fitter I may wish to lower the bars a little on the Giant. There is room to drop it up to an inch and the stem was reversed (to slope upwards) to give me a more upright position for the moment. So there is scope for further lowering the bars by re-reversing the stem. However, I suspect that the Giant’s position will just suite me just fine for the sort of riding I want to do in the future. 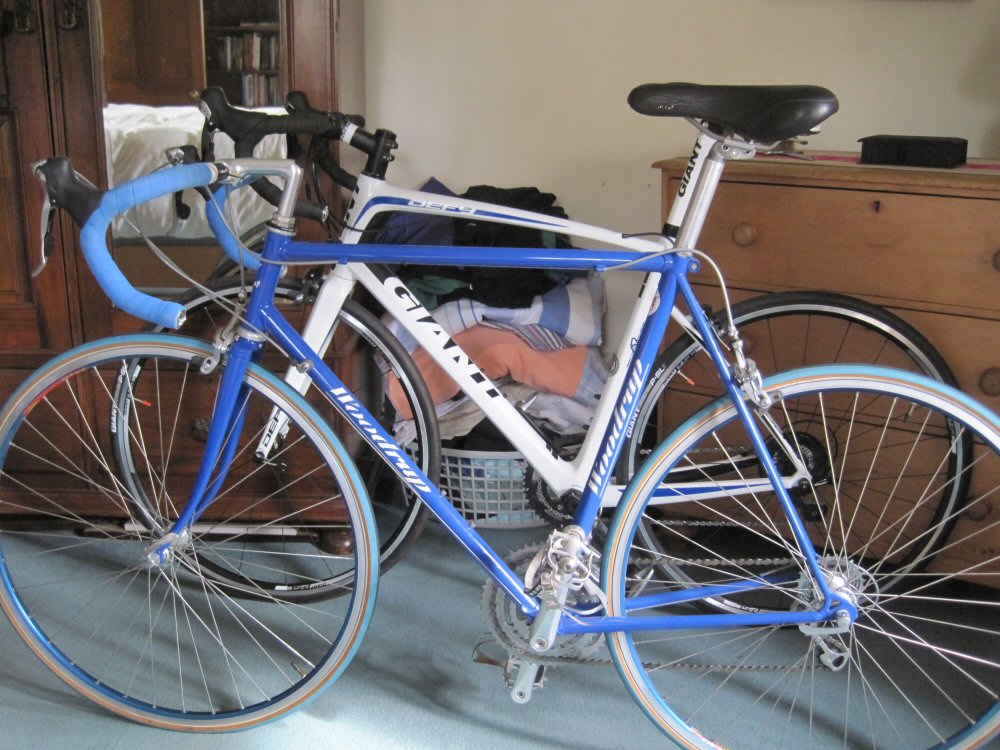 When I had the Woodrup done up my main regret now is that I went for the new combined brake and gear lever set-up and indexed gears. I should have stuck with the bar-end friction gear changers it originally had. This was once the preferred set up for road racers as you could change gear on the drops without having to let go of the bars. This made changing safer but also meant that you gave your opponents less of a signal that you are going to change gear, often a sign that you are suffering or, possibly about to mount an attack, depending on the circumstances. I may decide to try and equip the Woodrup with equipment more appropriate to its era. Apart from the frame itself the only original equipment are the seat pillar (Campag) and the  toe-clips (Christophe).