On the 8th March I posted here on my thinking about a new bike (buying a new bike) and identifying the Giant Defy 2 Advanced as the leading contender for my money. But due to it having been announced as the magazine Cycling Plus Bike of the Year, they would not be available at the dealers I contacted until late May or even early June. Then Graham Shortt of the Edinburgh Bicycle Cooperative in Leeds commented on the post saying they could get one for me within a few days. So, to cut a long story short, that’s where I collected my new bike on Good Friday. 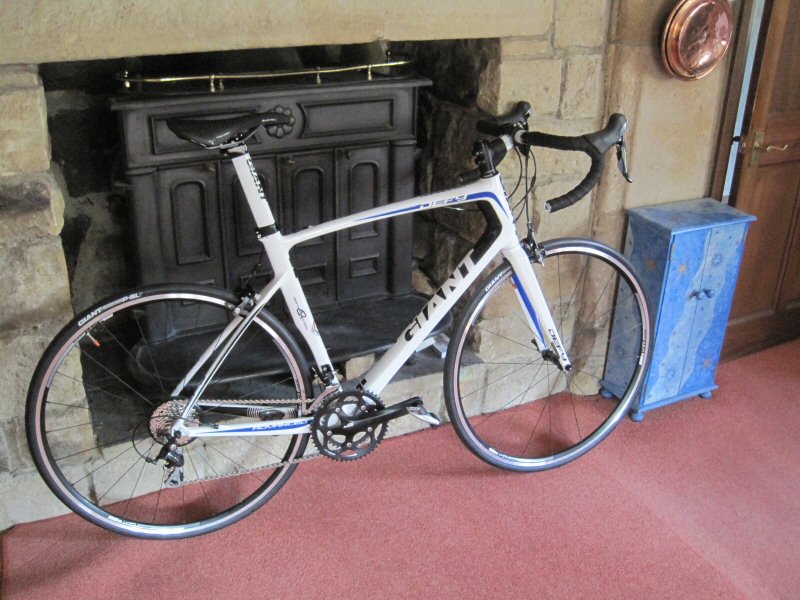 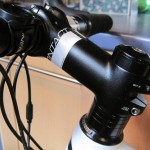 A week ago I went along to the shop at Chapel Allerton where Graham spent some considerable time helping me decide which size of frame I needed. The problem was that, at 6 foot, I was exactly halfway between two of Giant’s frame sizes – medium/large and large. He produced 2 bikes with these frame sizes and managed to fit them both to the position I wanted. This involved changing a stem on one, inverting the stem on the other, moving and adjusting the saddles of both, and trying a few different combinations of spacers to adjust the height of the handlebars. For each change I took the bikes out for a spin round the block which included a surprisingly steep hill. In the end I road the two bikes adjusted to identical positions and chose the smaller frame. The smaller frame seemed quicker in the bends. The last thing I did was ride them both round the car park in tight circles and the smaller framed bike definitely felt as if it cornered better. I’m not sure why this is and may just be an impression rather than a physical reality. The wheelbase of the smaller framed  bike is just 1.5 centimetres shorter, just over half and inch, but I’d be surprised if this made that much difference to handling and cornering. In the meantime I learned a lot about the modern head set and stem arrangements. The illustration above is of the set-up we ended up with for the smaller frame – the default stem length but inverted (which raises it) and with a 10 mm spacer (which lowers it). For future reference this stem height calculator may be useful, http://alex.phred.org/stemchart/, provided you know the angle and length of the stems you wish to compare and the available spacers.

The other issue we discussed was gearing. As someone who makes regular use of the smallest of the 3 chain rings on my hybrid to get up even quite modest hills I was worried that the fashionable ‘compact’ double chain ring set up wouldn’t give me the crawler gears I need. However, the bike has 10 sprockets on the block giving a theoretical 20 gears. My other bikes have blocks of 5 and 6. In practice you shouldn’t use top and bottom sprockets with the small and big chain ring respectively and there is some overlap so you end up with 18 usable gears. I could have had a triple chain set fitted for about £300 extra or an 11-30 block fitted instead of the 11-28 default for about £40. I decided to stick with the default as the bike is considerably lighter and more efficient than my hybrid and in due course so will I be. I can always get lower gears fitted one way or another later if I need them.

Graham told me about a nice on-line ‘drag and drop’ graphical gear calculator I found very useful to compare different combinations of chain rings and rear sprockets. You can view my 34/50 11-28 set up there. It shows the full range of gears in inches, percentage difference between adjacent gears and how fast you would be going in each gear at a cadence of 90 rpm. A more conventional gear calculator can be found at http://www.sheldonbrown.com/gears/.

So, as should be evident from this post, I was not short of attention, good advice and information from Graham and his colleagues at The Edinburgh Cycle Cooperative. This extended to the advice I got with pedals and shoes as I had never used the ‘new’ clip-less pedals and shoes before, another trip into the unknown. I was also very happy to deal with a worker owned cooperative. And the icing on the cake was when I was advised that, if I delayed buying and collecting the bike until Good Friday, I would get the sale discount on all goods including bikes of 15%!

Since collecting the bike yesterday I have been out on it twice for short rides to check the position and get used to the clip-less pedals. The position may need a little tweak and I will be going back to the shop in due course for a fine tune. Getting used to the pedals may be a bit more of a problem. On my first ride I couldn’t get my foot free as I approached a busy roundabout. I ended up using someone’s front garden path as and escape route before I got free. Embarrassing. I’ve got the hang of that bit now but I still have trouble getting my second foot clipped in when I set off. I am assured this will become second nature in due course. So far I am delighted with the bike. Comparing times and speeds on courses I have done on my hybrid it is clearly an easier bike to ride. Long drags I struggled up at about 4 to 5 mph I went up at 6 to 8 mph. Still not likely to worry Wiggins but a significant percentage improvement for me. Flat cruising speed is now nearer 20 mph rather than 16 and I’ve added a few miles an hour to my descent speeds too but this is probably due to the higher gearing. The bike is marketed as a comfortable but sporty endurance bike but I’m sure it is a better race bike than I’ve ever had before. It will be interesting to compare it with my retro Woodrup racer when I get it out when Spring arrives.