I got my old turbo trainer out of the garage during this year’s Tour De France, inspired by Bradley Wiggins and Team Sky, to try and get fit again and take to the roads once more. As I’ve mentioned in this blog before, I used to race in the 60s and early 70s in the South and continued to do so for a while after moving to Leeds in 1974 but finally gave up racing some time in the mid 80s. Over the years I accumulated a lot of cycling bits and pieces which I either threw away or gave away if they were any good. I passed on a pair of Mafac centre pull brakes and some Campagnolo components as well as a pair of sprints and tubs and some new unused tubs as well. In a conversation a few weeks ago with a relative newcomer to cycling I realised that, in this day of light high pressure wired-on tyres, what the Americans call ‘clinchers’, not every one knows about tubular tyres for bikes. What brought this to mind was noticing the near destruction of the tubular tyre on the rear wheel of my turbo after nearly 5 months of fairly constant use – illustrated above. I bought the turbo from Ellis Briggs in Shipley about 1977 so it’s about 35 year old now. At that time I put an old Holdsworth bike on it where it has been ever since so the sprint and tub on the back survived the clear out. I cannot now remember what make the tub is and in any case it and the wheel it is on was acquired when I bought a second hand Woodrup round about 1975. If the wheel and tub were original they date back to the mid 1960s when the frame was made so they might now be over 45 years old. They are at least 37! I don’t suppose there are many tubs this old still in some sort of service, but clearly this one’s days are numbered.

For readers not familiar with tubular tyres, or tubs, they are similar to conventional wired-on tyres in that they have an outer casing with a tread attached to the circumference that contacts the road, and an inner tube that can be inflated to high pressures within. The main difference is that the outer casing is also a tube with the edges meeting at the inner circumference where they are stitched or otherwise fixed together.

A tape runs round the inner circumference to cover the stitches or join. The inner tube is made of much lighter and thinner material than a conventional inner tube (it never has to come into contact with tyre levers). The construction method enables much lighter weights compared with wired-ons and can be inflated to much higher pressures – typical clincher 100 to 130 psi, tubs up to 200 psi. This makes them much faster and livelier for racing, less rolling resistance and less inertia to spin them up. The other advantage is they are generally quicker to replace when one punctures as it is just a matter of ripping the punctured one off and pulling a new one on. In a club road race it was normal to carry a spare tub folded behind your saddle for a quick swap and chase, assuming you had remembered to carry a pump too.

The wheel is also different in that the rim is designed to fit the inner circumference of the tub. The tub is fixed into the rim by using a wider adhesive rim tape or, as we used to do, apply tub cement or glue to the rim well. Once inflated to a high pressure the tub grips the wheel very tightly and, if properly fixed, they rarely come off. Even so, on hot days and with a lot of front wheel braking, the glue can soften and the tub roll off the rim. And on the track where very light tubs are used at very high pressures it is not unknown for a tub to explode. However, compared with the other risks of racing, these risks are relatively minor and unusual. Wheels fitted with these rims were referred to as ‘sprints’ – hence sprints and tubs. We used to cycle out to events with an old set of sprints and tubs on the bike, or winter wired-ons, but carry our best wheels either side of the front wheel on sprint carriers to use in the race. 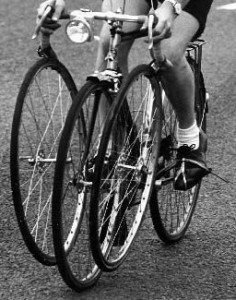 Fixing a puncture is quite a skilled job and although in my day most of us did it ourselves you could take a tub to a professional repairer and get the job done for about 10 shillings if I remember correctly (50 pence). When you were earning £4 a week this was a lot of money but a high spec new tub could cost more than a week’s wages. Today the top tubs used by professional track racers can cost over £200 each, as does the one below. I doubt if these are normally repaired. At the pressures they run they would probably explode when they puncture – 15 bar is 217psi. 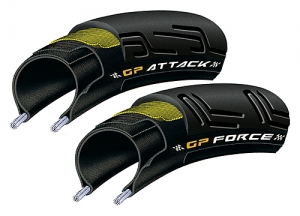 The best velodrome racers in the world rely on the best indoor tyres in the world: Many victories were achieved with the Continental Olympic tub in World Cup and Olympic Games. Its highly firm casing allows a pressure of up to 15bar

2 thoughts on “Sprints and tubs”